Breaking News
Home / Interesting News / At this $ 900 coffee house in Japan, you get a cup of 22 year old coffee 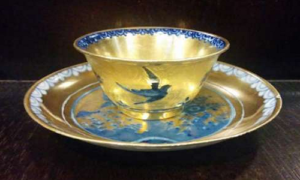 Munich, a small coffee house in Osaka, Japan, is the only place in the world where you can enjoy a 22-year-old coffee, but enjoying a coffee here is not enough for everyone. A 22-year-old cup of coffee in Munich costs $ 914 or about Rs.
Interestingly, the decades-old coffee started with a mistake.
The only employee and owner of this coffee house, Kanji Tanaka, used to sell a variety of ice coffee. They used to keep it in the refrigerator. Once they had forgotten to keep the coffee for 6 months. After a few months, they started throwing it as bad coffee but before that, they filled a sip of it. They were very surprised that the taste of the coffee was very old. But it also had a different kind of fun.

At that time they found out that this old coffee for months was still worth drinking. Kanji put coffee in the wooden canisters used to preserve the wine and kept it in the refrigerator for ten years. For a decade after Kanji had tasted coffee, it was like syrup.
On this, kanji started making coffee from seeds 20 years old.
They themselves grind these seeds and filter it with a filter system called Net Drip. In this way, the kanji eliminates the bitterness of the coffee and creates more aroma and effectiveness in the steam. Off. Kanji gives coffee to his customers through these canisters Kanji also offers a cup of coffee for $ 10 to $ 20 at his coffee house, which keeps them going well.